Digging into Xen at EC2

Mapping the cloud has already been done before (see Ristenpart et al.) and that Amazon leaks some information has been pointed out before. Nonetheless, there is still much more to be discovered.

Achieving co-residence is (of course) not endorsed by the cloud provider (in this case Amazon). The chance that two random VMs are co-resident in the cloud is very small, since the cloud consists of a huge number of physical hosts. However, if you launch n=20 VMs in a single burst (via the AWS API), there is a non-insignificant chance that at least two VMs of these are started on the same physical host.

Detecting co-residence can be done in multiple ways. For example by looking at the first hop (cf. Ristenpart et al.) or by exchanging “ping-pong” data through the Xenstore. A simple indication can be given by simply looking at the domain ID that your VMs have received. If these are sequential, then you have a good indication that these VMs might be co-resident.

During my experiments I recorded information on all the VMs which were launched in order to get co-resident VMs. The following figure gives an overview of the domain IDs that my VMs received. 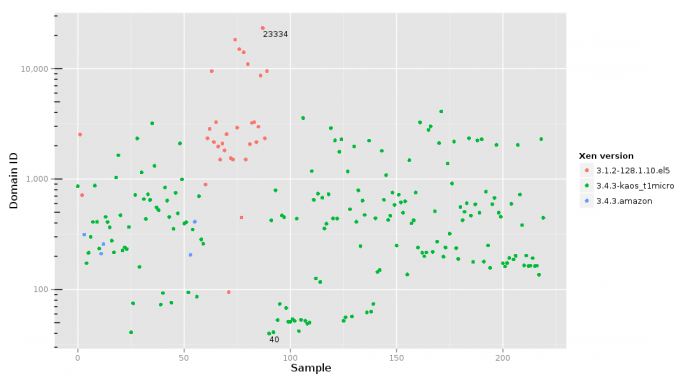 This graph conveys that the domain IDs can vary quite a lot. Also shown is the Xen hypervisor version that was running on the respective hosts.

I encountered at least three distinct versions of Xen hypervisors in the US East region. This information is exposed by Xen via the xen_version hypercall.

From this information, we can infer a few observations.

Up next: learning more from the hypervisor and the Xenstore.

These 220 measurements were taken throughout November 2012 on Amazon EC2 US-East region. All instances were micro instances.

no responses for Digging into Xen at EC2

This site uses Akismet to reduce spam. Learn how your comment data is processed.